When I swapped the 2GR-FE v6 into my MR2, one of the little things I did was add an oil pressure sensor hooked up to my Race Capture Pro data logger.  This has allowed me to log oil pressure for later analysis along side all of the other parameters that I log on track or at an autocross.

Earlier Toyota v6's have been known to have some pretty bad oil starvation problems when tracked, and while others experience has shown that the 2GR does not suffer as badly as the earlier motors, I wanted to check for myself.

Below is a scatter plot of oil pressure collected over a few autocross runs, with the average pressure plotted on top of it. 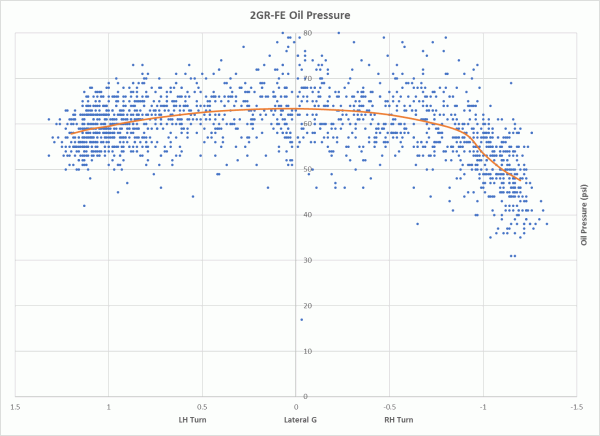 As you can see there aren't any data points that are "scary low" (this was logged at 10hz, so a single data point doesn't mean much), but there is a notable drop off on RH turns, starting at about 0.8 lateral g.   One commonly suggested way to deal with oil starvation is to over fill the oil pan.  The charts below show the effect of adding approximately an extra half quart, and an extra full quart. 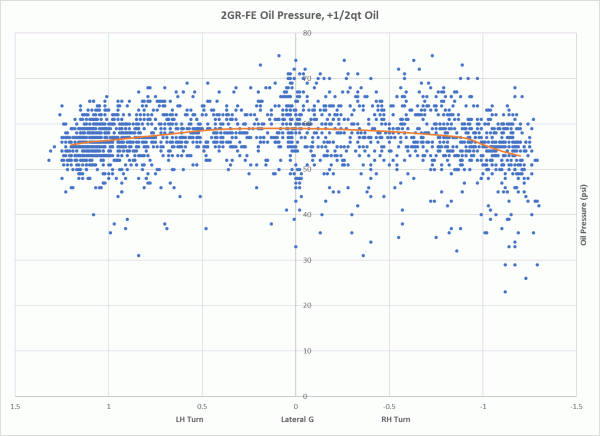 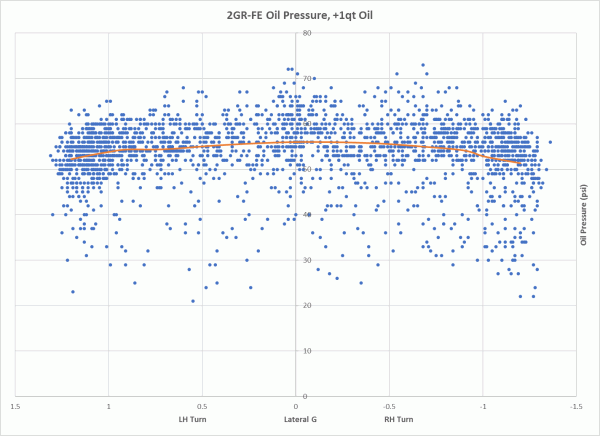 And here is the average pressures plotted together and normalized so they all have the same zero g pressure. 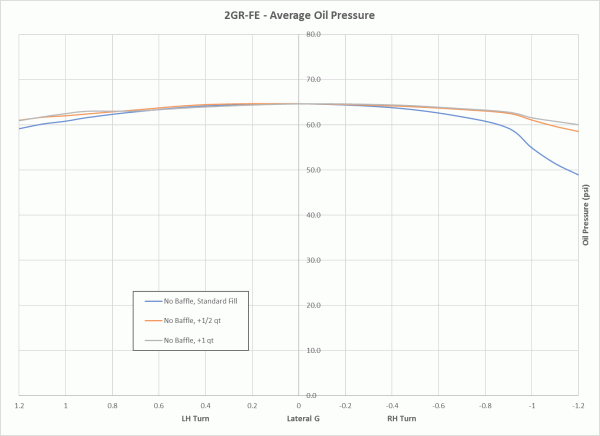 Adding an extra half quart has a significant effect on the pressure drop, particularly on right hand turns, but a little on left turns as well.  Adding a full quart helps just a tiny bit more, but not much.  However, adding extra oil is not without it's downsides.  If you look at the scatter plots the full quart seems to produce a lot more low pressure scatter at all lateral g levels.  I suspect this is a sign of aeration happening in the sump but I do not know for sure.  Also, a full extra quart will cause the motor to burn quite a lot of oil.  A catch can (preferably with a drain back to the oil pan) does seem to mostly solve this problem, especially with only a half quart over-fill.  With the full quart over fill some smoke was observed even with the catch can.  It is worth noting that all three of these data sets were collected on the same day, and the same autocross, with oil fill level being the only significant variable.

When I first swapped the motor I filled it with 5w40 Rotella T6, mostly out of habit since that is what I had run for years on my old motor and I was familiar with it.  The following year I switched to Mobile 1 5w30.  I also started developing a baffle for the oil pan at the same time.  What I did not know at the time was the change in oil weight would produce a notable difference in the degree of oil starvation seen.  The graph below shows this difference.  Again, this data has been normalized so that the zero g point is at the same pressure. 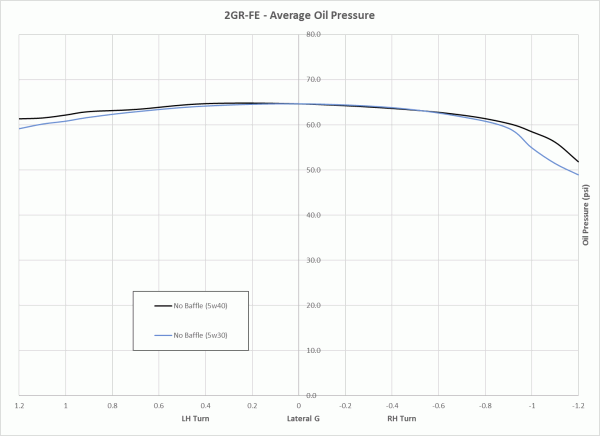 I have two theories as to why this might be.  The first is that the slightly heavier oil simply sloshes a little less in the pan.  The second is that the heavier oil causes the oil pressure relief valve to open a little further, meaning that less oil is pumped to the motor and more oil is returned directly to the pan.  Given the dramatic difference in pressures seen by adding an extra 1/2 qt of oil to the pan, we know that the level of oil in the pan is very critical.  It is very possible that by keeping the relief valve more open, the heavier oil maintains a slightly higher average oil level in the pan.

As mentioned above, I also began developing an oil pan baffle after my first season with the 2GR.  The change in oil weight significantly complicated this task, as many of my designs did not seem to provide much improvement.  However, it just so happened that my baffles were improving the pressure data by about the same amount that the change in oil weight had worsened it.  Plotted together with the same oil weight used in all cases, my original oil pan baffle performance is shown below.  The effects of adding extra oil to the pan are also shown. 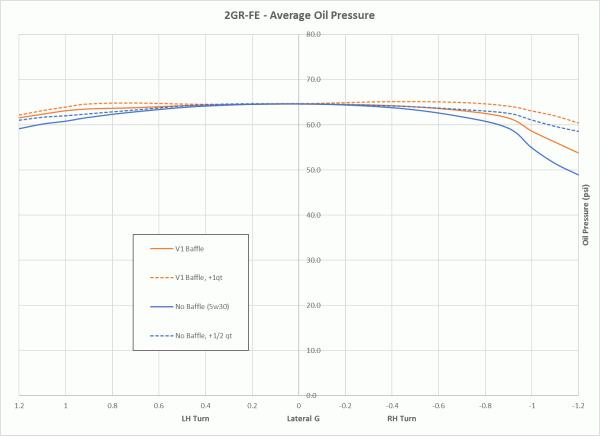 As you can see, the baffle provides a decent improvement in the pressure data.  Not quite as much improvement as over filling alone, but the baffle plus the over fill is even more effective than either alone.  Note that when I tested my baffle with extra oil I started the day with an extra quart and by the end of the day had burned off about half of that.  I don't recommend running more than an extra half quart, and the difference in performance between a half quart and a full quart is very small.

I have also tested five additional baffle configurations.  Some have been better than others, none have yet proven to be the magic bullet.  However, a baffle plus a good catch can and an extra half quart of oil in the sump seems to provide adequate protection.  My baffle is available for purchase here.

It is also worth noting that while all of the data presented here was gathered in an autocross setting, I have a lot of data from the track as well which shows the exact same general trends.