In the interest of learning more about the dampers I use in my coilovers I built my own pneumatic shock dyno during the winter of 2015, and began testing shocks.

The data below has all been generated on that dyno.  All of the optimal damping curves are based on the formulas found here: https://optimumg.com/spring-dampers-part-four/ using a damping ratio of .65 and a high/low split point of 3 in/s. 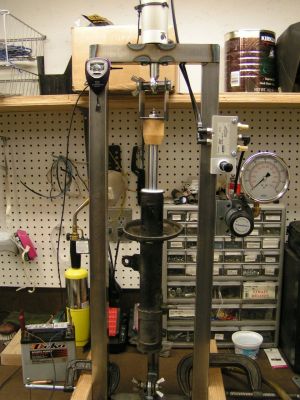 Optimal curves for this plot are based on the front of an MR2 (about 500lb sprung weight) with 400lb springs.

The baseline curve is with both compression and rebound set to full soft.

1 and 2 turns rebound are, as you would guess, that many turns stiffer in rebound. Notice that the compression damping curves are barely visible, they overlay on the baseline curve so well. VERY little cross talk on the adjusters!

1 turn rebound #2 was when I went backwards from 2 turns down to 1 turn. As you can see, it overlays very closely on the original 1 turn graph.

2 and 4 clicks bump are, again as you would guess, that many clicks increased. There are 11 clicks (12 steps) total in bump, although I cannot imagine using more than 2 or three of them. 2 clicks would be about optimal for an 800lb front spring! Again notice that the rebound graphs for these two overlay almost perfectly with the original baseline rebound graph.

These results would suggest that, on an MR2, the minimum spring rate for which the 8611 dampers would be optimally matched is about 400lb/in.  However, with sway bars taken into consideration a little bit less spring rate could be appropriate.

This graph shows a four 8611 inserts plotted together at different adjustment settings.  Full soft, 1 turn rebound / 2 clicks bump (1R,2B), and 2 turns rebound / 4 clicks bump (2R,4B).  At 2 turns rebound there is a notable difference in rebound force between the -1257's and the -1259's, but each pair matches quite well.  I don't know if this random luck, or if there is actually some small valving difference between the two part numbers.  At softer settings all four shocks match up reasonably well. 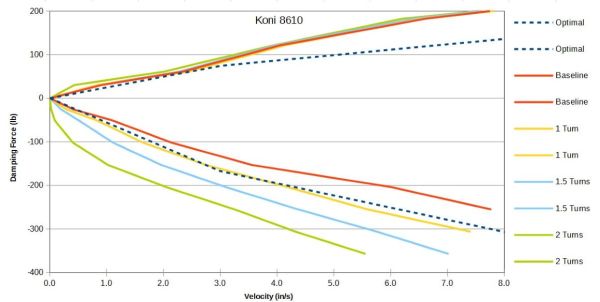 This graph is based on the averaged data collected from a set of four 8610 Race inserts (2x -1436, and 2x -1437).  The optimal curves are again for the front of an MR2 with 400lb springs.  On the rebound side the 8610 seems to be very similar to the 8611.  In compression they show a less digressive damping curve than the 8611's, with low speed damping being a little softer than the softest setting on the 8611, and higher speeds being about equal to a setting of 3 clicks. 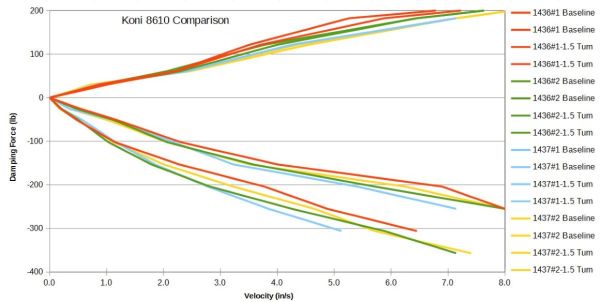 This graph shows four 8610 shocks, each at full soft and at 1.5 turns rebound all plotted together to show shock to shock variations.

The standard Koni Yellow inserts for the MKII MR2. 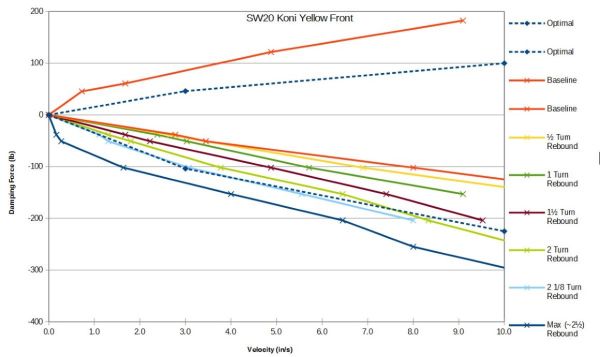 As with the Race, there is very little cross talk from the rebound adjuster into compression.  Also, subsequent tests at the same settings produced results nearly identical to the first test.  The adjusters are very consistent, just like the Race shocks.

These results would suggest that, on an MR2, the maximum front spring rate that the Koni Yellow shocks can handle without becoming significantly under damped in rebound is about 400lb, less if you consider the additional spring rate contributed by the sway bar in some situations. 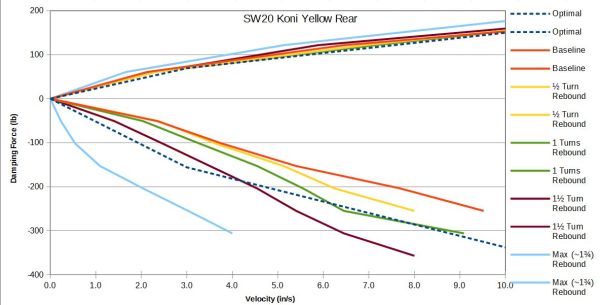 Optimal curves are for the rear of an MR2 with 400lb springs.

This suggests that the max spring rate for the rear with Koni Yellows is about 500lb before they start to become under damped in compression.  In rebound they should be able to handle a bit more than that.

Download the spreadsheets below to see different spring rates and damping ratios match up with the adjustments on your shocks.