In the process of developing the Wilhelm Raceworks big brake kit, I have calculated the brake bias of numerous combinations of rotors, calipers, proportioning valves, pad friction values, etc.  In the interest of better explaining why I make certain recommendations, the results of some of those calculations are outlined below.  The optimal bias range shown in green was calculated assuming a 3000lb MR2 with 42/58 weight distribution and a cg height of 18".  Optimal bias shifts forward as deceleration rate increases due to weight transfer, producing the upward slope on the graph.  The white area indicates excessively forward bias that is likely to significantly compromise braking by under utilizing the rear brakes, while the orange area indicates bias that is too far rearward and is likely to cause the rear brakes to lock up first, a situation that is very likely to cause a spin.  The line between the green and orange areas is the theoretically ideal bias, but it is nearly impossible to hit that line perfectly at all deceleration rates, so a few percent forward is generally best. Notice that at 1g deceleration, the optimal front bias on the MR2 (or any car with a rear weight bias) is about 61%.  This means that the rear brakes should be doing almost 40% of the work!  This makes rear brake upgrades and optimizing brake bias even more important on a mid or rear engine car than on a typical front engine car.

The OEM '93+ MR2 Turbo brake system is often held up as the gold standard for MR2 brakes.  The graph below shows the theoretically optimal brake bias for a MKII MR2 at various deceleration rates, along with the bias for the OEM '93+ Turbo brake system. The OEM bias curve in blue is based on .3µ (coefficient of friction) pads. I also plotted the effect of switching to higher friction .45µ brake pads in yellow.  Since they generate more brake torque for a given brake system pressure, the proportioning valve "engages" later, causing the brake bias to shift rearward.  As you can see with lower friction pads the OEM bias is very good, crossing into the danger zone only above 1.1g, a region unlikely to be entered by most cars (particularly on typical street tires).  However, installing higher friction pads has the potential to move the bias too far rearward, leading to potential rear lockup above about .9g deceleration. 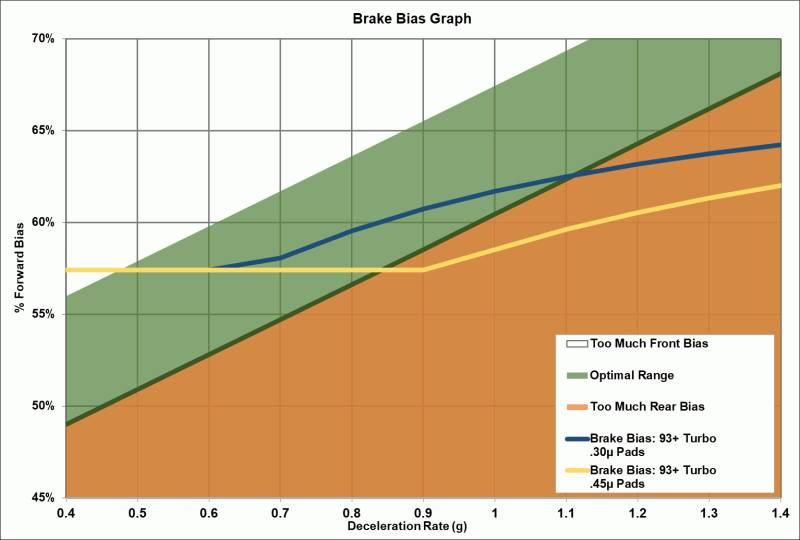 This graph shows the bias curve for my kit using the Wilwood FSL calipers with 1.38" front and 1.25" rear piston sizes and .45µ pads and 12.19" rotors.  Note that with the NA proportioning valve the bias is reasonably good, although it crosses into the potential rear lockup zone a little before 1g.  However, the turbo proportioning valve with it's much higher knee point causes the bias to be much further rearward, about 6% too far rearward at 1g. 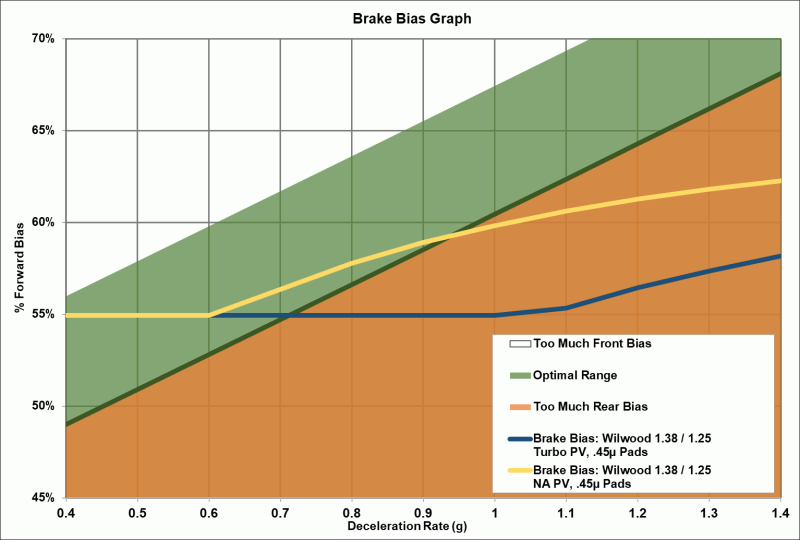 It is worth noting that the front brakes typically run hotter than the rears, and most (though not all) brake pads have a friction curve that increases with temperature, up to the point where they start to fade of course.  If the rear pads operate at just a slightly lower friction level of .42µ with the front at .45µ, the bias shifts forward quite significantly as shown below.  This is enough to move the NA proportioning valve into a pretty safe zone, however, with the turbo valve the bias is still much too aggressive. 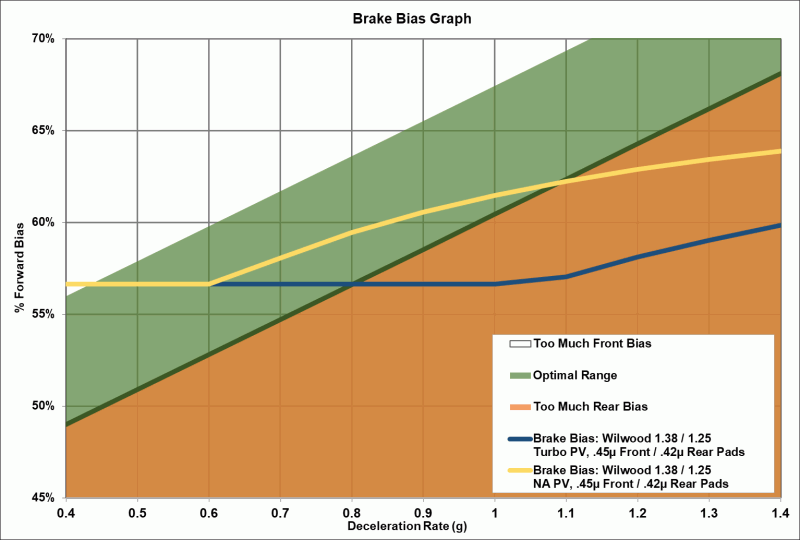 Therefore, for cars with the OEM turbo proportioning valve it becomes necessary to change the calipers to move the bias more forward.  Switching the rear calipers to the 1.12" piston version produces optimal bias at 1g deceleration, as shown below.  Bias at lower deceleration rates is not quite ideal, but this is often a necessary compromise. 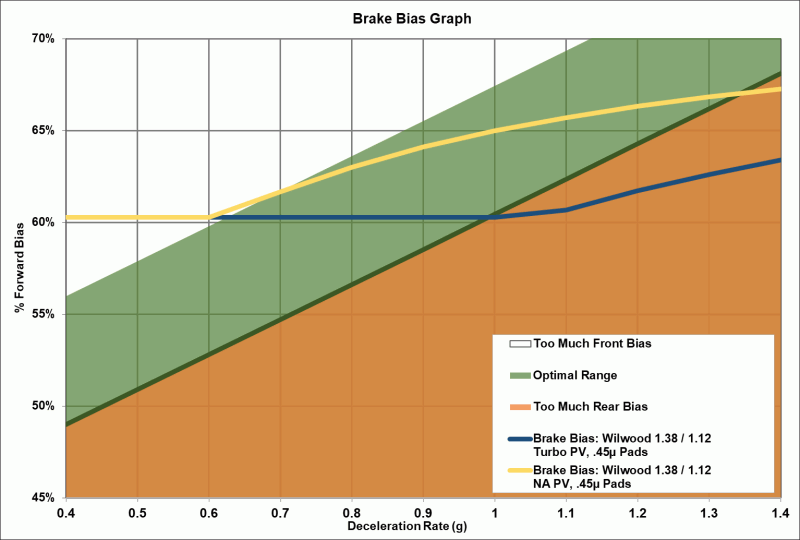 The graph below is an example of what can go wrong if proper care is not paid to brake bias when upgrading the brakes. This is the bias resulting from "upgrading" just the front brakes using one of the many kits on the market that use the Supra rotors and 1.62" piston calipers while keeping the stock '93 Turbo rear brakes (blue line).  Note that I had to re-scale the vertical axis to even show this on the chart! Compare this to my kit with the 1.38" front and 1.12" rear Wilwood calipers (yellow line).    The car with the first setup will not stop nearly as well as a properly biased brake system, and will most likely be prone to locking the front brakes very easily. 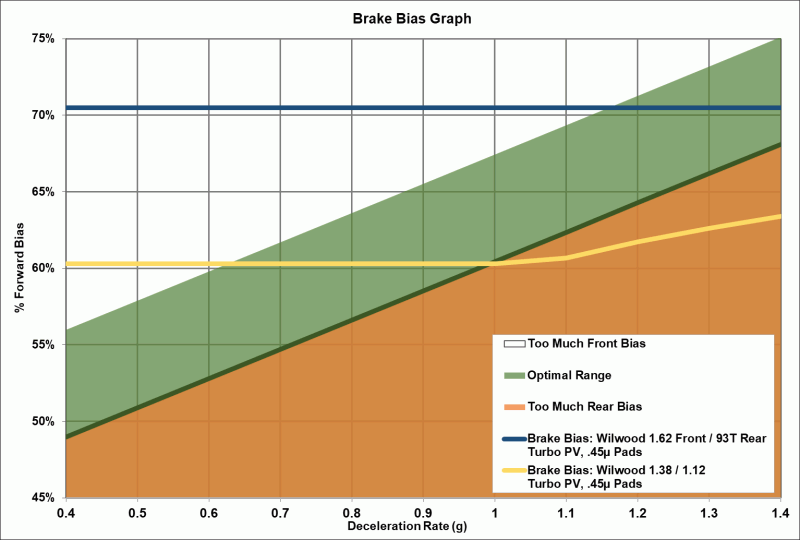 Street cars on street tires are unlikely to significantly exceed 1g under braking.  Sticky race tires are another story, and so it becomes necessary to optimize brake bias for deceleration rates above 1g.  Also, most track / race pads have much higher friction levels than street pads.  Because they generate more brake torque for the same brake system pressure the effect of the proportioning valve is delayed, causing the bias to shift rearward.

The graph below shows the effect on brake bias of switching from a .45µ pad to a .55µ pad (such as the Wilwood BP20 included in most of my brake kits), with 1.38"/1.25" calipers and the NA proportioning valve.  As you can see, this setup is likely to cause rear lock-up issues under hard braking.  I experience this on my own car with this setup, prompting me to install an adjustable proportioning valve. 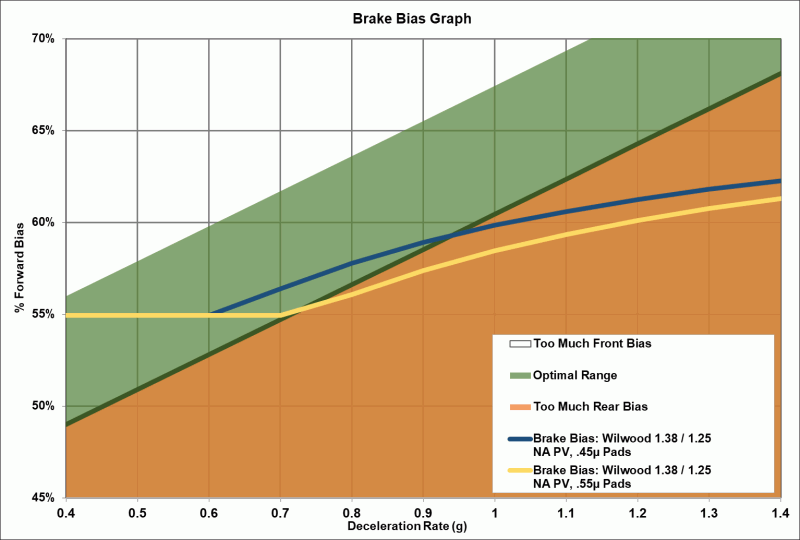 As you can see this is optimal at just over 1.2g, while being a little further forward than optimal at lower deceleration rates.  However, it is pretty good in the entire 0.6-1.2g range.  This is the combo I supply in my brake kits as it is the easiest, most hassle free setup for most users.   It also works OK with the stock turbo proportioning valve, although it is more aggressive at high deceleration rates as shown below. 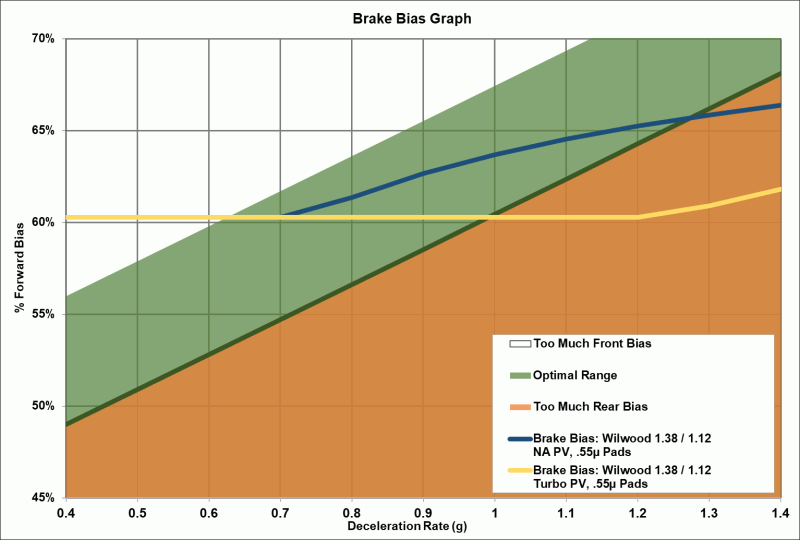 For those looking for a truly ideal solution, an adjustable proportioning valve can be tuned to provide optimal bias over a wider range of deceleration rates.  The graph below shows the effect of switching the rear calipers back to the 1.25" pistons and replacing the NA valve with a Wilwood adjustable valve with a slope of .50 and the knee point set to 300psi (approximately 1.5 turns in).  This produces a brake bias that is nearly optimal from .5g to 1.2g. 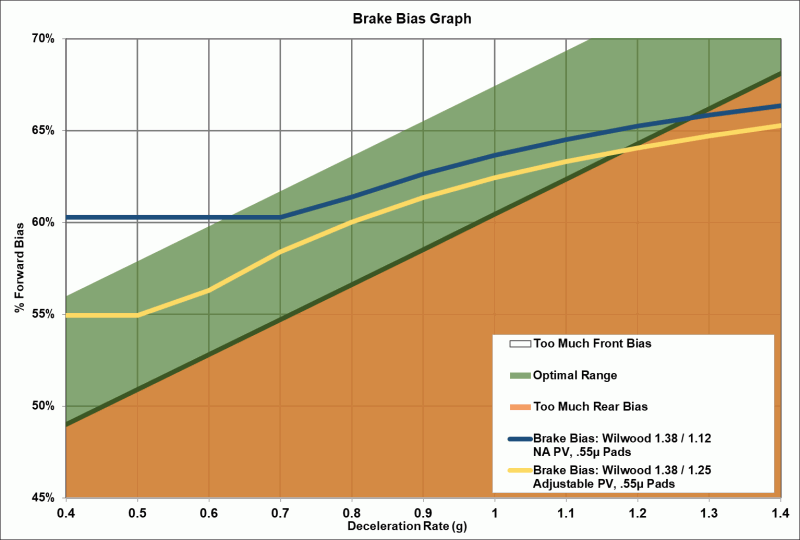 Another thing to keep in mind is the effects of temperature on pad friction.  Nearly all pads have friction coefficients that vary with temperature (some more than others), and it is unlikely that the front and rear brakes will operate at exactly the same temperature.  This can have significant effects on brake bias, and it can be a difficult effect to accurately predict. 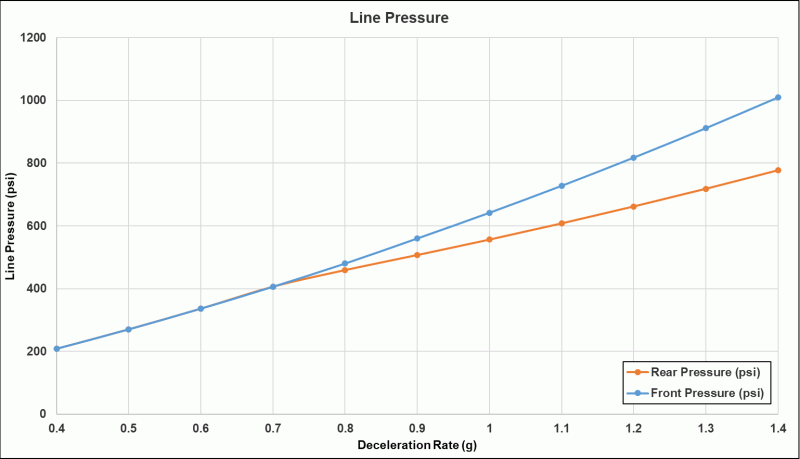 If you wish to further explore the topic or to calculate brake bias for alternate setups, download the spreadsheet below.  The input data is pre-filled with values typical of a modified MR2 with my brake kit.

NOTE: You must enable iterative calculations in your spreadsheet program for this calculator to function properly.  Instructions for enabling iterations in Excel or LibreOffice.

For reference, data on various proportioning valves is listed below.  OEM data is from the MR2 factory service manual.  Data on the Wilwood adjustable proportioning valve is from my own testing described in my Brake Proportioning Valve blog post.  Please note that this data is based on the average of testing two valves.  Individually, the valve outputs were 40psi apart (plus or minus 20psi from the average listed here).