A few months ago I posted about a new exhaust that I built for my 2GR swapped MR2.  It sounds great, it looks awesome (especially in combination with the rear diffuser that I built around it), but I very quickly found that it had one major drawback.  TERRIBLE drone at about 2500rpm.

Before we go any further, here's a picture of the exhaust with the diffuser, and a flyby video of the exhaust on the track.  You can see why I wanted to fix this exhaust, rather than building something new that might not fit or might change the sound. 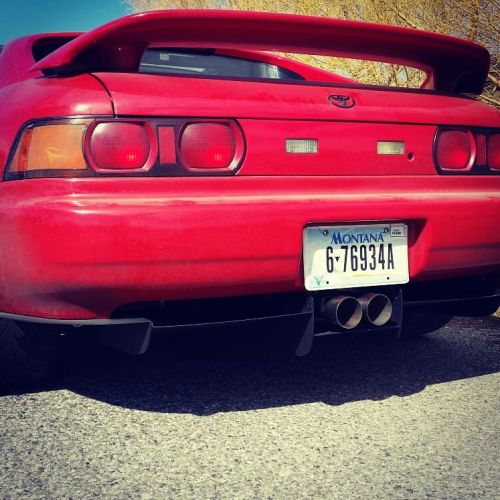 The first step in building either of these devices is knowing the frequency that is causing the problem.  For this I turned to a cell phone app.  It may not be 100% accurate (and I did not bother to calibrate it, so the db numbers are likely not right), but it's good enough.  Cruising at 2500rpm produced the following: 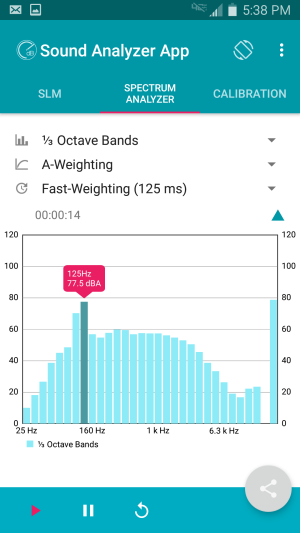 I built two spread sheets to calculate the required dimensions for a Helmholtz or quarter wave resonator, they can be downloaded below:
Helmholtz Resonator Calculator
Quarter Wave Resonator

Note that since these types of resonators depend on the speed of sound, they are temperature dependent.  However, because the exhaust does not actually flow through the resonator, they don't operate at the full exhaust gas temperature.  In my testing my resonator tends to run around 90-110° Fahrenheit while cruising on a warm day.

I ended up building several iterations of my resonator, targeting 125hz.  The first used 3" tube for the canister and 1" tube for the connecting pipe, and while it helped a lot it was (I think) just a little too small to really do the job.  So I built another using 1.25" tube for the connector, and 4" for the canister.  As the diameter of the connector goes up, so does the required volume of the canister.  Similarly, as the length of the connector goes up the required volume goes down.  So there are a lot of ways you can adjust the three key dimensions to get the same effect.  My calculator includes fields to calculate three separate options so they can be viewed and compared side by side. 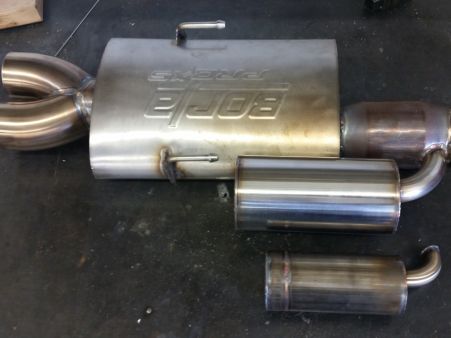 The larger resonator seemed to help more than the small one, but still didn't seem quite as effective as I was hoping.  However, at this point I discovered an error in my spread sheet (two missing sets of parentheses).  Interestingly, the error had only effected my calculation for the small resonator by a few percent, but had effected the calculation for the large one by about 30%!  With that corrected I modified the resonator one more time, taking almost 3" out of the length of the canister.  The end result on the frequency analysis was pretty profound: 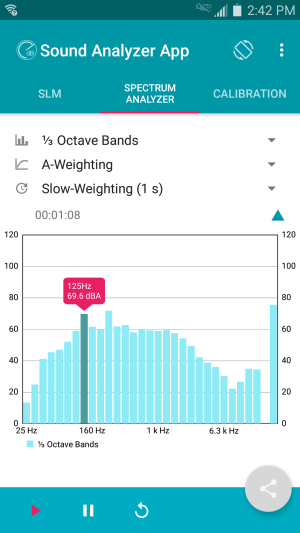 Driving, the results are even more impressive.  It went from almost instant headache to a little drone but not too bad.  Interestingly, there are a couple of areas where the frequency analysis appears to be slightly louder with the resonator, but keep in mind this is a crappy uncalibrated cell phone mic we are talking about!  Here's the final resonator installed under the car: 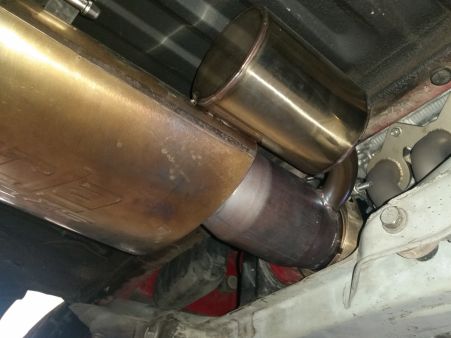 At this point, the drone is mostly gone, but it still could be just a little quieter overall for long drives.  So for temporary use I picked up a pair of 3" silencers to fit into the exhaust tips.  I had to borrow an exhaust pipe expander from the auto parts store to make them fit, and also grind the edges of the silencers down slightly with a belt sander, but the end result is they tap into place easily with a hammer, stay there without any fasteners, and can be removed easily with a slide hammer when I get to the track.  I'm sure they cost a few hp, but it's a hardly noticeable amount driving around town or cruising on the highway, and they pretty much eliminate the remaining drone and drop the overall sound level by a couple of db. 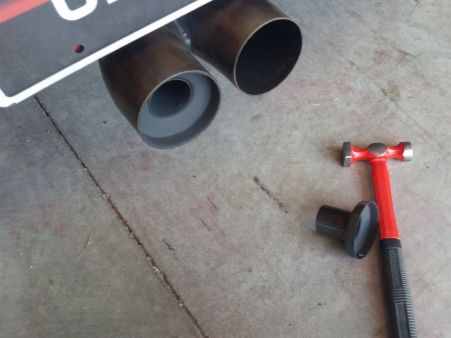