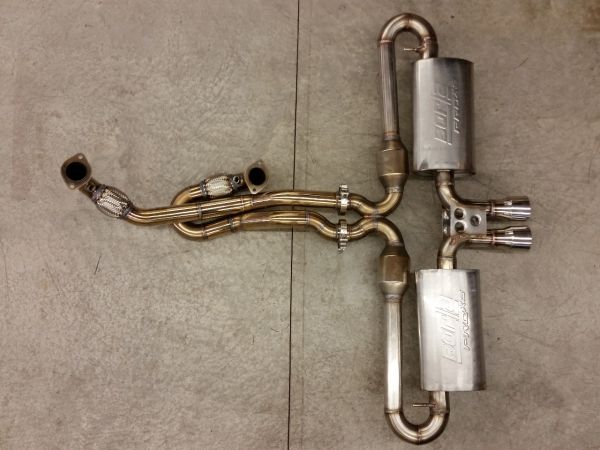 Almost since I first v6 swapped on my car, I have been reading about the performance benefits of a true dual exhaust with an x-pipe compared to the y-pipe I have been running.  But I was skeptical.  How much difference could it really make?  Would I even be able to fit two pipes over the cross member?  Finally I decided to give it a try.

My first design followed the basic layout of my previous center exit exhaust, except I used a Borla muffler with dual inlets, dual outlets, and an internal x-pipe.  I had determined that it would just barely fit lengthwise under the trunk (the x-pipe muffler being 5 inches longer than the single 3 inch muffler I used on my last system).  First step was to mock up the muffler position and the pipes required to clear the motor mount and cross member. 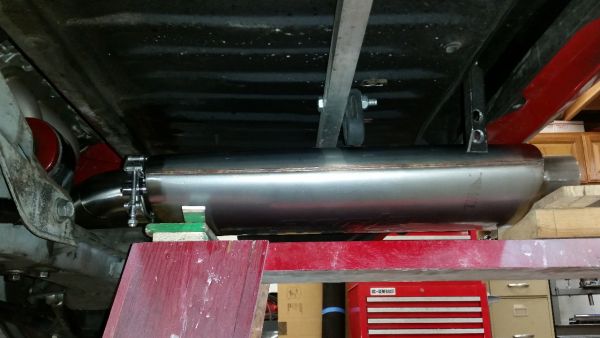 The LH inlet to the muffler points straight at the motor mount, so some creative piping will be required, but it does just barely fit.  With the positing determined I tacked the hangers to the muffler, very similar to how they are done on my other exhaust of this design.  You can also see the inlets cut to absolute minimum length with v-band flanges tacked on.

Next, I started building out the piping between the muffler and headers.  This getting this to clear the motor mount and fit between the transmission, cross member, and rear bank header was a bit of a trick, but it all worked.  Keeping the pipes equal length further complicated matters, but in the end I managed to get them within a tenth of an inch by my measurements.  All of the tube is 2.25in diameter from Ace Race Parts.  Their butt weld elbows in particular are very reasonably priced, and are probably the nicest mandrel bends I have ever worked with.  They also have tighter bend radii than I have found anywhere else, which was critical to getting everything to fit. 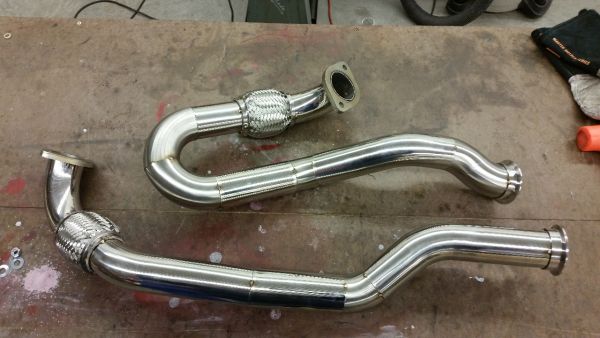 That's all the pictures I took of the version 1 build process.  But what about the results?  A week or so after finishing the exhaust I went to a local shop with a dyno, planning to test the new X-pipe setup vs my old Y-pipe and center exit Borla muffler.  First we ran 5 pulls with the new exhaust, then swapped on the y-pipe and ran a couple of pulls with the y-pipe alone (no muffler, no catalytic converter).  The result was a big mid-range gain, and a small gain above 6500rpm as well (red is X-pipe, green is open Y-pipe). 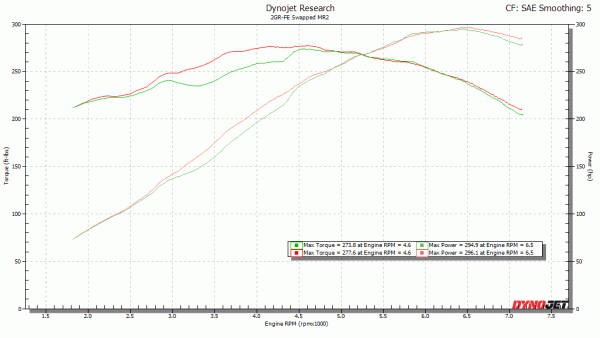 I had been meaning to dyno the car with the (old) new exhaust ever since I built it last spring, mostly because I was really curious how much power would be lost to the "high flow" catalytic converter I had installed.  So at this point with the car still strapped to the dyno I installed the muffler and cat section and did three more pulls.  Amazingly, it GAINED 6hp with the addition of the cat.  I had previously tested open y-pipe vs Berk muffler with no difference in power, so all I can conclude is that either the cat or the Helmholtz resonator is what made the difference.  For more info on this and other dyno tested 2GR performance improvements, see my 2GR Power Gains article. 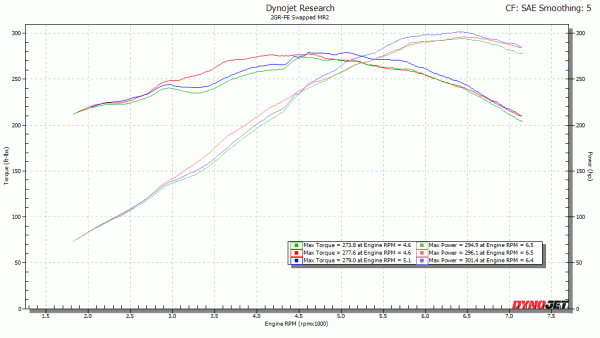 So, now I have two exhaust systems, one that makes a bunch of extra mid-range torque, the other that makes quite a bit more top end power.  Additionally, the new X-pipe system is a little too loud for my taste, and while it doesn't drone quite as badly as the original Borla did before I added the Helmholtz resonator, it still has quite a bit of drone and no good place to add any sort of resonator.  So, on too...

It would appear that, against all generally accepted beliefs, a catalytic converter will actually make more power on this motor (or at minimum, doesn't seem to cost you any power).  I don't know if that's because of how the stock ECU is tuned, or some exhaust scavenging effect from the cat itself, but regardless I consider it to be a good thing.  More power and a cleaner car?  Win-win.  So with that theory in place, the goal becomes to design a dual exhaust system with an X-pipe, room for cats, and room for resonators if needed.  Oh, and it also needed to be tucked up as tight as possible to the bottom of the trunk so that my diffuser would still fit.  I mocked up several designs in Solidworks to get an idea of what would work, and settled on something approximately like this. 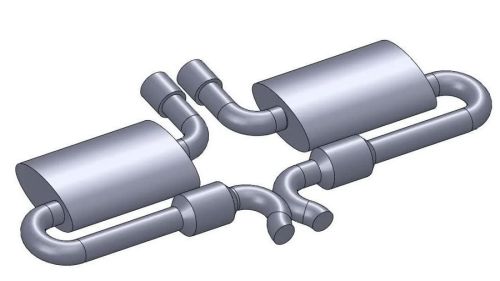 I started with the X-pipe.  Two elbows welded together to form a 180° bend, which I then machined with the mill to form two perfect openings which I tack welded together to make the X.  After that the incoming side was cut off of each elbow at about a 45° angle and flipped around and welded back on, giving me an X-pipe with parallel inlets, and outlets pointing out at 90° to the inlets. 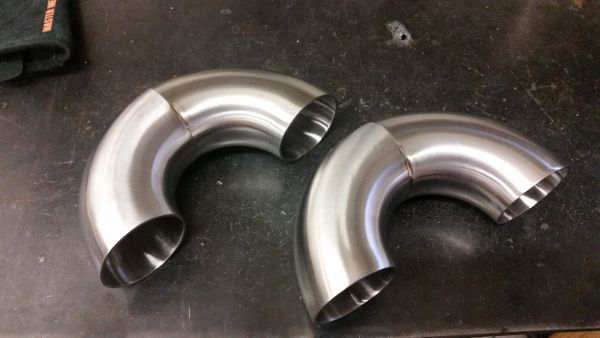 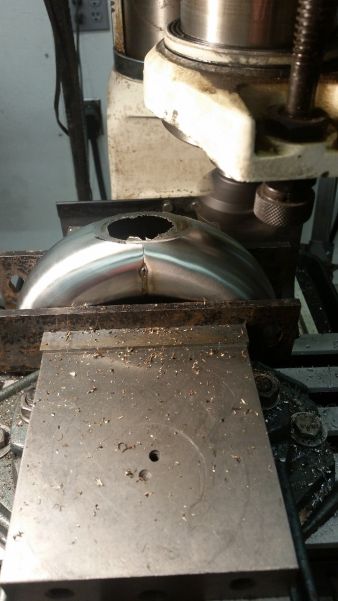 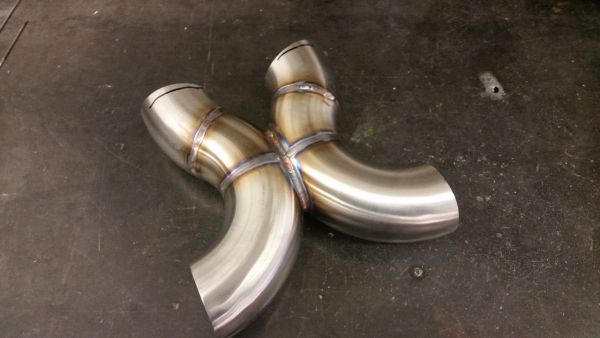 Next the mufflers, working backwards from the other end of the system.  I tacked a couple pieces of scrap in between the two muffler bodies to hold them in the proper orientation while I worked, and tacked on the inlet and outlet bends on the muffler as well as adding pieces of 3/8 rod to act as muffler hangers. 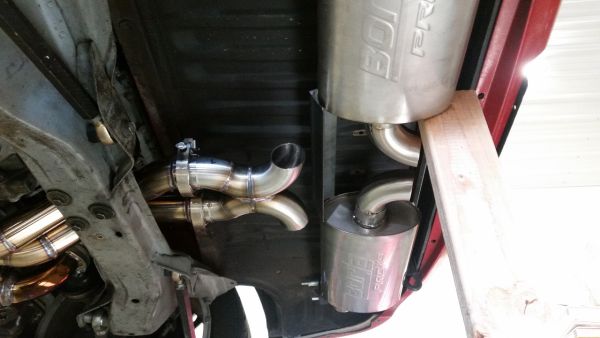 Big ugly chunks of angle iron holding the mufflers together may be OK for mockup, but I wanted something a little classier.  Who doesn't love gusset plates with flanged holes?  I know I always have, not only do they look sweet, but the flanges provide a lot of additional stiffness.  I cut two gussets from stainless steel sheet, and flanged the holes in them using an old MR2 rear ball joint and front wheel bearing race.  The two are an absolutely perfect fit to each other.

The two plates were welded between the muffler outlet pipes, and the temporary bracing was then cut out.  The cats have also been tacked to the X-pipe at this point. 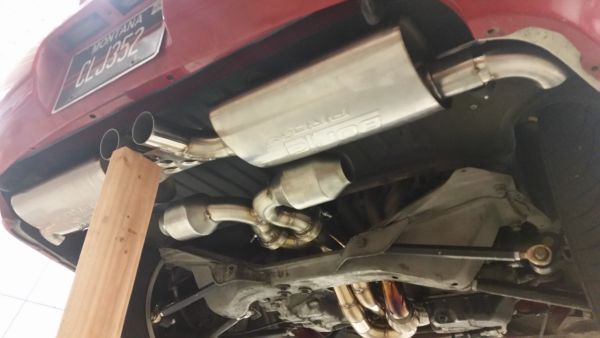 In an effort to up my TIG welding game on this project, I picked up a new large gas lens setup for my torch.  Nothing special, 30 bucks on Amazon for the whole kit, but it made a big improvement in the color and shine on my welds.

Next, the last two sections of pipe and two elbows were tacked in place on the car to join the mufflers to the x-pipe and cats,  and finally everything was back purged and fully welded.  I also added gussets to my exhaust hanger rods to (hopefully!) keep them from tearing out of the pipe.  Speaking of exhaust hangers, I had hoped to be able to use the stock hangers on this project, but with as tight as this needed to fit to the trunk to clear the diffuser, there was just no way to use them.  So I ended up making my own from pieces of aluminum angle and the same universal rubber muffler hangers that I used on my last exhaust project.  The machined notch in the aluminum is to clear the muffler, that's how tight this all is.

Finally, the last step was adding the two 3" exhaust tips.  And here's the complete system. 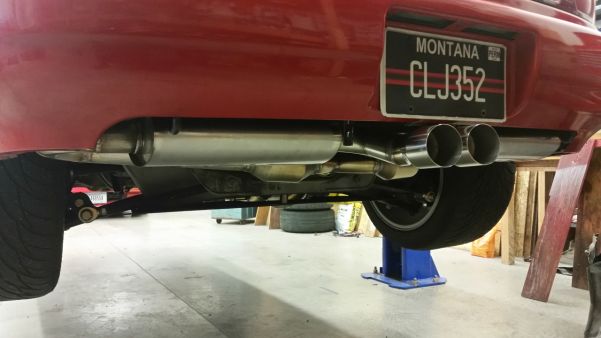 Perhaps the only downside to this exhaust is the weight.  As you might guess it is substantially heavier than either my old center exit Borla, or the V1 X-pipe exhaust.  It's actually about the same as the Berk exhaust.  But it is much quieter than either of my previous center exit setups at cruising speeds, and overall it sounds fantastic.

Performance wise, it made a little more power than the V1 x-pipe but sadly didn't quite match the Y-pipe with catalytic converter and center exit Borla in the 4500-6500 rpm range.  See my 2GR Power Grains post for more info on this and other dyno tests.  What does this say for my theory of making more power with a cat?  I'm not sure.  While it did make more, it wasn't by much.  It's possible that the X-pipe that I built is just a little better than the one built into the Borla muffler, or perhaps moving it a few inches closer to the motor put it at a better spot.  But it does seem safe to say that a high flow cat won't HURT power. 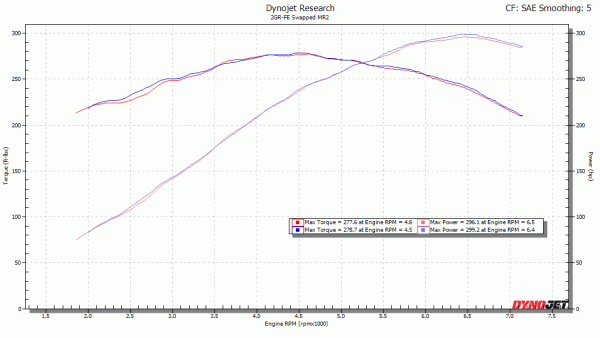 In normal driving (and I expect on an Autocross course) the additional mid-range torque is very noticeable, and the sound level is much more livable.  Overall, I'm happy with the results.